Last week, Crunchfish attended the world’s largest AR+VR (Augmented Reality + Virtual Reality) conference, AWE (Augmented World Expo) 2019, in Santa Clara, USA where the company demonstrated its patented gesture interaction technology. The leading augmented reality companies in the world were brought together to exhibit augmented reality smart glasses, applications, software technologies, and more. The interest for touchless interaction grows every year and Crunchfish – as a leading provider of interaction technologies – demonstrated how touchless interaction with hand gestures will revolutionise how we interact with and experience our physical and virtual environment in AR.

AWE, the world’s most visited AR+VR conference now in its 10th year, gathered more industry professionals than ever before. Crunchfish participated with its own booth and exhibited its gesture control technology using AR-enabled mobile devices and augmented reality smart glasses from Vuzix and Realwear.

It was clear during the show that consumer products are now in the spotlight. Many new products were launched with better performance and more capacity than ever before, including Nreal’s smart glasses and Qualcomm’s Snapdragon 855 chipset and reference design. Following the success of Pokémon Go, new augmented reality games are being launched for the mobile and tablet market, including the much anticipated, Minecraft Earth game. Although Apple, the 3rd largest AR company in the world according to DigiCapital, did not exhibit at the show, the company is expected to launch an AR device for the consumer market within the next year. As the hype crescendos for the new Minecraft Earth and the AR gaming industry in general, one issue with AR gaming remains – power consumption. Because of this long-standing issue, Crunchfish has developed its gesture control software to be extremely power efficient. With its latest product track using NPU (neural processing unit), the company broadens its range of products with the most efficient and best-performing solution to date. Crunchfish takes pride in providing gesture solutions that exceeds the market’s expectations.

“During the show, we had many fruitful discussions about our technology and the advantages of using hand gestures for AR interaction. It is clear that Crunchfish has a market advantage with our pinch gesture and that we are at the forefront of gesture interaction with our energy efficient technology, which was confirmed during the conference”, comments Daniel Milesson, Head of R&D at Crunchfish. 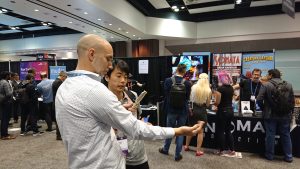 Looking from a commercial aspect, it is clear that the market is growing. New segments were introduced at this year’s AWE and it is both within the enterprise segment and the earlier addressed consumer segment. More companies have conducted pilot studies and the atmosphere at the show enabled the exchange of knowledge and ideas. PTC and AMA are two major market players that presented their product lines with sharp use cases for Industrial AR (manufacturing, service and maintenance).

“A crucial aspect for a successful deployment of smart AR glasses is the user focus, where touchless interaction is a key contributor to accomplish outstanding experiences. During the AWE 2019 in Santa Clara we showed how our extensive knowledge in this field has resulted in one of the markets most intuitive gesture interaction technologies. This created a lot of attention and interest to our stand where we got the possibility to tighten our relationship with existing customers and partners, as well as connecting with a wide range of new potential clients”, comments Henrik Winberg, Head of Sales at Crunchfish.

AR glasses continue to get better performance and more attractive form factor. The segment will continue to develop and after seeing the Nreal smartglasses that are planned to be introduced later this year, it is fair to say that the design is getting closer to a product for consumer market and all day use with a much better form factor and design. It will be interesting following the development of the AR glasses segment. Crunchfish had many visitors in its booth requesting gesture control for AR smartglasses and the company demoed its solutions for market leading companies such as Qualcomm, Apple, Vuzix and PTC. The market has understood that interaction with glasses requires interaction methods, and that hand gesture control is the market leading solution.

“Crunchfish is pleased to see that the AR market continues to grow with interest from both the industry and consumers and that the interest in gesture control is bigger than ever. We had a great AWE show that gave us both new insights and many new customer leads”, finishes Joakim Nydemark, the CEO of Crunchfish. 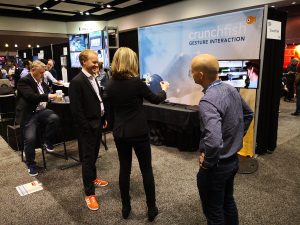